Skip to main content
Time and time again, PA’s extremist politicians have gone with the nuclear option, using violence, conflict, or aggression as their tools to attack our freedoms, democratic institutions, and election integrity. 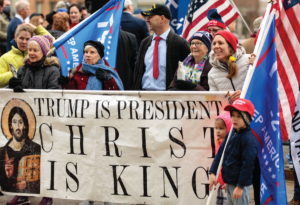 Extremist politicians in the Republican-led state legislature have declared an all-out attack on Pennsylvanians and the fundamental freedoms we hold dear. Our freedom to vote and have our voices heard, our freedom to make life-changing medical decisions for ourselves, and even the independence of our judges and court system – all hang on a knife’s edge.

The result is that Pennsylvania has become a battleground for everyday folks looking to defend their freedom and what’s theirs.

Time and time again, Pennsylvania’s extremist politicians have gone with the nuclear option, using violence, conflict, or aggression as their tools of choice. The attacks on our freedoms hit new heights following the 2020 elections, when some of our elected officials colluded to prevent the certification of President Joe Biden’s win. When that failed, some of those same lawmakers went as far as to help fund and even join the armed insurrection to overturn the election results on January 6. The violence committed that day against civilians and Capitol police officers will live in infamy as one of the darkest moments in the history of our democracy. But it doesn’t stop there.

The horrors of the insurrection painted a picture of our new, grim reality. One in which a relentless and violent minority rides roughshod over our rights until they get what they want. We see that right here in Pennsylvania, where extremist politicians are attempting to force through constitutional amendments which would strip residents of a laundry list of essential rights and freedoms.

Senate Bill 106 is a prime example. Following the U.S. Supreme Court’s decision to hand the power to decide abortion rights to individual states, a minority of elected officials began laying down the groundwork for a total abortion ban in Pennsylvania. Their proposed amendment would strip Pennsylvanians of the ability to make the life-altering and extremely personal decision of having a child. SB106 would take away abortion rights, alter how our votes are cast and counted, and enact a complex legislative power grab.

A massive overhaul of the Pennsylvania Constitution shouldn’t be done in such a shady process. This is not how the Constitution lays out how changes should be made. The bad actors in the Pennsylvania legislature are violating the constitution and robbing the public of their limited ability to have a check on this process. Under one of the proposed amendments, pregnant people in Pennsylvania would be subject to the abhorrent cruelty of forced birth.

We only need to look at other states to see what could come after that: Forced births leading to grisly and often fatal outcomes in hospitals because doctors are blocked from ever terminating a pregnancy; the creation of a surveillance state in which the government monitors the every last move of pregnant people; and even a potential death penalty for anyone who choose to have an abortion.

Governor Wolf should be applauded for standing up and fighting for the people and our rights as citizens. SB106 was a midnight raid to ban abortion rights, make our elections more chaotic, and undermine the balance of power for political gain. And it’s shameful.

And the violence against regular Pennsylavanians keeps going. Scores of election officials and poll workers in our state have been forced to quit their jobs following constant harassment and even death threats. These kinds of threats spiked following the 2020 election, when Donald Trump launched a stream of baseless claims about voter fraud which were then used to justify abuse of election workers. More than a quarter of Pennsylvania’s election officials have retired in the past two years alone. Their departures not only put a tremendous strain on our election system going into midterm elections this November, but they also offer violent extremists an opportunity to cause havoc on election day and further undermine our state elections.

It’s that kind of havoc that is at the heart of efforts by extremist politicians to pass a law allowing for the intimidation of poll workers and voters. Voter intimidation weakens the voice of all Pennsylvanians, but nearly always falls hardest upon voters of color, who already face the greatest barriers to the ballot box.

In the past, when extremist politicians attempted similar attacks on the rights of Pennsylvanians, our state courts were able to step in and block them. But the ability of judges to independently enforce our state constitution could be in jeopardy if elected officials manage to push through a proposed constitutional amendment which would allow the legislature to draw judicial districts used in judicial elections as prescribed in House Bill 38. If that were to happen, the same map manipulation and unfair gerrymandering tactics we’ve grown accustomed to when it comes to redistricting would suddenly be used to skew our judiciary for partisan advantage. Put plainly, our state judges often serve as the last barrier between everyday, regular Pennsylvanians and the relentless, violent, power hungry, minority, in power looking to take away their rights. We can’t allow our courts to be attacked and hijacked.

The attacks on our rights and freedoms are stacking up. We the People are stronger than the people in power. Members of the Pennsylvania legislature chose violence, but we don’t have to – we’re better than that. When Pennsylvanians from across the state come together to defend what’s ours, no one, not even extremist politicians, can take our freedoms away.

This Election Day, we must stand unified in our opposition to the attack on our freedoms and free and fair elections, as well as the assaults on our courts. Instead, we’ll peacefully fight for a better Pennsylvania, one where the voices of all voters are heard and the rights and freedoms of every Pennsylvanian are protected. Vote!